Following the release of the roadmap for neo-culture creativity, each of Tencent’s digital culture operations (including Tencent Pictures, Tencent Comic, Tencent Literature, Penguin e-Sports, and Tencent Games) shared their strategic priorities and latest updates. Of particular note, Penguin e-Sports made its first public appearance as an individual entity at the UP conference.

In his opening address before the conference, Wu introduced the strategic vision for “neo-culture creativity” – meaning the promotion of mutualism between cultural and industrial values through broader mainfr 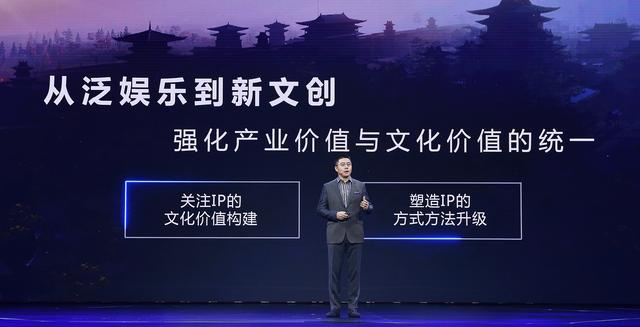 “The idea behind our strategy was to upgrade pan-entertainment into neo-culture creativity – but where is the upgrade? I think there are two core points,” Cheng explained in a speech. “The first point is to focus on the value construct of intellectual property in a more systematic format; the second point is to upgrade the method and format of creating intellectual property. Only through the extensive connections of various collaborative approaches, cultural resources, and creative methods can we realize the digital cultural production of higher efficiency,” he added.

The introduction of “neo-culture creativity” is not only an upgrade to Tencent’s 6-year old “pan-entertainment” strategy but also an entirely new line of thought on a cultural level for Tencent.

After six years of implementing the Pan-Entertainment strategy, Cheng believes that intellectual property is a familiar concept in the industry. The shaping of intellectual property, cooperation, and logic within the industry, as well as the entire business ecosystem have gone through significant change. The fields related to pan-entertainment have much space for both self-development and co-development.

From “Pan-Entertainment” to “neo-culture creativity”, Cheng added one key point to existing four major components. They are:

Establish “new standards” with attention to the intellectual property of “Industry + Culture”;

On the final point, Cheng said, “The one consistent theme is patience. Culture is a product of time – even just a good piece of work, intellectual property or not, requires many years of hard work.” Cheng added that building “neo-culture creativity” is a long and systematic project that requires patience and ingenuity, coupled with open-minded cooperation.

As the first industry session at the conference, Tencent Pictures announced a list of 15 film and television productions, including Mystery of Antiques?(“古董局中局”)?that would be released in 2018. Five cultural production series consisting of Melody of Time?(“時代旋律”), Stories from the East?(“東方故事”), Dimensional Break?(“次元破壁”), Chinese Sci-Fi?(“中國科幻”), and International Expedition?(“國際探索”) were showcased. Also highlighted were the games Honor of Kings?(“王者榮耀”) and JX3?(“劍網3”),?the Japanese anime Saint Seiya: Knights of the Zodiac, which will receive live-action adaptations; and an animation series for Journey to the West?(“西行紀”) this summer.

the establishment of Tencent Pictures Distribution, a wholly-owned subsidiary;

a collaboration with Skydance Media to produce a remake of the first “Terminator”, with James Cameron as one of the producers; and

the initiation of Long Gu’s complete series of works over the last decade with his eldest son, Xiaolong Cheng. 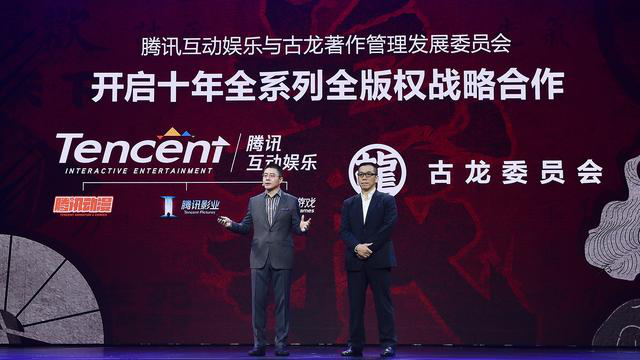 Stories from the East Series

A joint project with comics master Tsai Chiih Chung and Dunhuang Academy to remake the historical story of Dunhuang. The project has been launched exclusively on Tencent Comic in September.

A collaboration with Phoenix Entertainment on “Jin Yong’s Works in Comic Form”, to be released this year, including:

The Deer and the Cauldron, ?

Fox Volant of the Snowy Mountain?

Currently, three of the comics are being released in a serialized format.

A joint co-creation project with Super Gen and Next Animation Studio for e-sports themed anime. With five projects already confirmed Future: Reactivated?(“未來重啟”), The Boss?(“野區老祖”), Master of Sales?(“販賣大師”), The Door to Galaxy?(“星原之門”), The Battlefield of the Sky?(“天梯戰地”), productions will be successively uploaded onto the Tencent Comic mobile app.

A collaboration with the Honor of Kings?intellectual property content team to create an official comic series that remakes the heroic story of the game.

A joint co-creation and property rights-sharing project with M.Y. Entertainment President and brilliant producer Angie Chai to produce a comic – My Quarter Boyfriends?(“我的1/4男友”)

Excellent comics displaying traditional Chinese culture, such as Qin Xia (“秦俠”) and The National Landscape (“山河社稷圖”), both of which will be animated this year.

The pre-registration for the mobile game?A Person?began on April 23 as well. Tencent Comic jointly launched a “The National Intellectual Properties Activation Program” with Mofang Studios in coordination with the release of A Person?this year, exhibiting the allure of China’s local culture.

Zou stated that Tencent Comic will continue to reinforce its cooperation with partners to explore how to fully transform the ACG realm of content into intellectual property.

On platform development, Zou announced that Tencent Comic has already reached a consensus to cooperate with quality platforms such as WeChat, QQ mobile, Tencent Video, book.qq and QQ browser. With content being the core consideration, these collaborations will initiate personalized joint-operations according to the different natures of their users.

Zou stated that after three years, Tencent Comic has already developed a relatively mature “ACG economy” business model, providing authors with better creative environments on one hand and helping intellectual property to grow on the other, thus increasing industrial value.

Tencent Literature: Releasing strategy and system for intellectual property for running the “IP partners” system to its full course

“In the era of ‘Made Intelligently in China’, we’re witnessing the rise in the demand for digital cultural products. Among these products, online literature, a culture relatively unique in China, has proven to be the most popular cultural item,” said Tencent Literature CEO Wenhui Wu at the conference.

On cultural output, overseas online portals have published about 150 English translated works internationally, accumulating about 9 million visitors. Meanwhile, digital and print publication has been authorized for original works in Japan and Korea; southeast Asian countries such as Thailand and Vietnam; as well as European countries such as the UK, France, Turkey; and America, totaling 7 different languages and more than 20 partners producing more than 300 pieces of work.

On the system for cultivating writers, Tencent Literature reached 6.9 million creators in December 2017, with the “Twelve Kings of Internet Literature” leading the charge for many emerging writers.

On maximizing intellectual property value, China Literature will release many popular intellectual property television and film adaptations, such as The Shared Moment Between You and I?(“你和我的傾城時光”), CMFU Academy?(“CMFU學院”), The King of the Military?(“兵者為王”), The Caterer?(“美食供應商”), and Heavy Industries of the Nation?(“大國重工”). On promoting premium content, high quality intellectual property shows such as Year of Celebration?(“慶余年”), The Nights?(“將夜”), Martial Universe?(“武動乾坤”), Breaking the Vault of Heavens?(“斗破蒼穹”), The Golden Irises?(“黃金瞳”), Legend of Fuyao?(“扶搖”), and The Rise of Phoenixes?(“凰權·弈天”) will be released on screens too.

On developing the ACG field, Tencent Literature released “The Reading Spirit”, the first integrated ACG platform. ACG productions adapted from Internet literature such the special edition of The King’s Avatar?(“全職高手”) and Legend of Immortal?(“星辰變”)?animations; The Full Time Mage?(“全職法師”) comic; as well as the games Devour the Stars?(“吞噬星空”) and The New Continent?(“新斗羅大陸”)?will be released as well.

Penguin e-Sports: Strategic planning for the next five years, Building a new industrial ecosystem with the thinking of “sportization”

As an important part of the neo-culture creativity ecosystem, Penguin e-Sports presented itself as an independent entity for the first time at the UP conference.

General Manager of Tencent Interactive Entertainment, Research and Integrated Marketing, Miao Hou stated that e-sports is not only ba

Penguin e-Sports established on December 9th, 2016. With “Chinese e-sports is entering a golden era”, there are over 11 major e-sports tournaments across multiple fields with two major focuses - the “League of Legends” and the “Honor of Kings” tournament series. These tournaments have maintained a high rate of growth with 22 billion spectators and 250 million pla

Referencing the primary problems of the e-sports industry – such as the professionalism of tournaments, talent cultivation system, industry rules and regulations, and urban e-sports foundations, Hou clearly stated that Penguin e-Sports will focus on sportization of the industry when implementing the strategic planning in 2018.

In particular, the tournament and commercialization systems under Penguin e-Sports will be fully upgraded in 2018 to continue building the international influence of Chinese e-sports. The “King Pro League “and “League of Legends Pro League” will adopt a fixed-seat system to allow teams more leeway to run long-term operational planning. Simultaneously in June, Penguin e-Sports explored innovation of different tournament types and set up an S-league for the mobile game “QQ Speed”. Penguin e-Sports will learn from traditional sports industries and cooperate with top brands such as Mercedes-Benz, vivo, McDonald’s, SPD Bank Credit Card, and L’Oreal Paris to create an international e-sports commercialization system. In addition, the Honor of Kings Champion Cup International Invitational took place in Beijing on August 11, with a prize of 1,000,000 USD. In addition, the winners of the League of Legends Pro League Spring Finals represent their region at the MSI Mid-Season Championship, while the Asia Match of the Continental Tournament takes place in Dalian.

On the urbanization planning, Penguin e-Sports will launch an “E-sports City Development Plan”, using dedicated funds and resources to match the needs of local governments for creating premium competition, while continuing to explore the in-depth integration of regional culture with tournament under a home-and-away format. While providing support for scrimmage, Penguin e-Sports will li 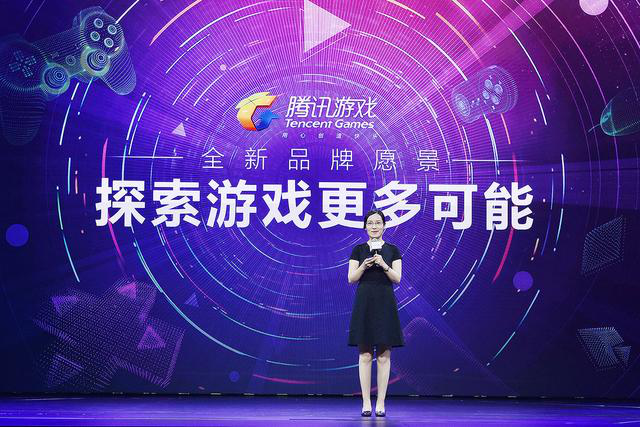 With this goal, Tencent Games started a series of explorations long ago:

Second, setting up the infrastructure for functional games to open up new perspectives for application in different industries. The Joint?(“榫接卯和”) and The Folding Fans?(“折扇”) released earlier by Tencent Games, providing education of traditional craftmanship through interactive experiences, while solo games such as “Human Resource Machine” have been well-received by students and programmers;

Cooperate with universities across the country on a large scale to provide closed-loop creation, production, incubation, and publication experiences to university talent;

Create an open exchange platform for the industry to promote talent exchange in vertical sectors and support excellent innovative projects, and to further supply brilliant talent to the industry.

Li stated that Tencent Games will cooperate with more partners to inject a range of cultural content and generate a larger platform for application in the era of neo-culture creativity. “Exploring more possibilities for games” will also become the brand‘s new vision.

As a “Technology + Culture” company rooted in the Internet, Tencent has organized many sessions of “WE Summit” with a focus on technology and innovation since 2013; nowadays, Tencent has rolled out another “UP Conference” ba

Following the launches of neo-culture creativity and the announcement of five business units, Tencent Games has also announced a full product roadmap for 2018.