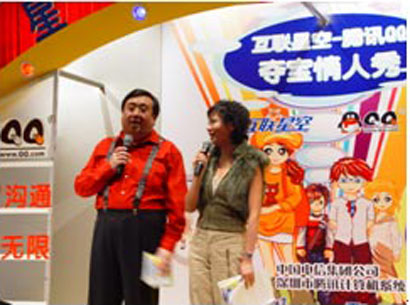 It was the evening of February 13 2004 Shanghai. On the Valentine's Eve Shanghai the metropolitan of fashion and glamour was filled with the romantic scent of roses. An evening reception hosted by Tencent QQ and China Telecom's Vnet commenced in Shanghai Grand Theater of the People's Square for the inauguration of the comprehensive strategic partnership between Tencent and ChinaVnet in 2004. Several high level managers from both Tencent and China Telecom attended this grand activity and gave congratulatory speeches decorating Valentine's Eve in Shanghai this year with a special glamour.

ChinaVnet is the nationwide application business brand of China Telecom. China Telecom aims to make full use of its user/network/application platform resources marketing networks customer services and advertising channels to build the environment for the healthy development of the Internet industry actively promote the continuable development of the Internet industrial chain and create new business model of Internet services. Tencent is a leading IT enterprise as well as one of the most influential Service Providers (SP) in China. As a customer-oriented and constantly innovative company Tencent takes advantages of its huge customer ba

As an important partner of ChinaVnet Tencent pays high attention to the development of ChinaVnet and has done a lot of advertising and market promotion activities in collaboration with it. At the beginning of 2004 in order to further enhance the partnership to let more QQ users get familiar with ChinaVnet and to introduce wonderful QQ services to more China Telecom users two parties took advantage of the Valentine's Day introduced this large-scale activity and jointly launched "ChinaVnet + QQ" a strong fashion/entertainment team.

The party at night was bustling and creative with various games such as funny and suspenseful "Treasure Hunting Lover Show" and the maze of "Lover True or False". In the latter game four pairs of lovers participated in three stages of tests to distinguish their true lovers from false ones. The game of "I Know Your Mind" put flush on the cheeks of other four pairs of participants with questions digging into their secrets of love. "Lover's QQ Show" had four pairs of participants respectively matching their clothes and competing on the T shaped stage. "Wit Competition" baffled participants but entertained guests. The whole activity was the combination of romance and excitement of happiness and affection. With creative and humorous games and tests fervent singing and dancing famous talk show emcee Na Wei running the show and Hao Yu the campus singer's sidesplitting "Undergraduate's Self-study Song" the content and the format of the activity greatly catered for the individualized taste of the Q Generation nowadays and echoed the romantic festival atmosphere of the Valentine's Day. 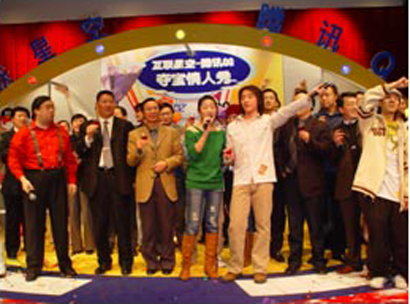 In order to emphasize the Internet flavor of the party and satisfy cyber users that weren't able to attend ChinaVnet's website and Tencent's website both provided the live show of the whole party. The general manager of ChinaVnet Ye Lisheng addressed at the party that the collaboration of ChinaVnet and Tencent QQ will enable the vast number of QQ users to enjoy various QQ VAS (including QQ Coin Recharge via ChinaVnet QQ Love QQ Show and QQ VIPs) more conveniently on ChinaVnet's platform; QQ on the other hand will greatly satisfy the individualized demand of ChinaVnet users concerning IM online games friend making and Internet communities. At the earlier stage of this acitivity ChinaVnet also provided QQ service users through ChinaVnet platform with lottery opportunities on the spot. The prizes of the lottery including Valentine's Three-day Shanghai Tour and souvenirs etc. became an eye catcher at the party.

Zeng Liqing the COO of Tencent expressed that Tencent has been a long term close partner and steady supporter for ChinaVnet and two parties had launched a lot of effective collaborations in the past year. Both Tencent and ChinaVnet will further their collaboration in the future to offer China's broadband users more convenient and joyful services.